The Eagle's Nest of the Riviera

Château de la Chèvre d'Or, this romantic Château on the French Riviera is perfect for a couple looking for a top-notch intimate wedding venue. It can be found in the village of Eze, described by Wikipedia as an “eagle’s nest” because of its location on a cliff 427 meters above sea level. The Château de la Chèvre d’Or offers a stunning view of the Mediterranean Sea and has magical gardens filled with sculptures, fountains, waterfalls and flowers. It’s a perfect setting for any wedding ceremony.

It was initially a private property, home to a Yugoslav violinist, Zlatko Balokovic. It has since become a hotel and Michelin starred restaurant, and remains a famous location frequented by celebrities including Walt Disney. 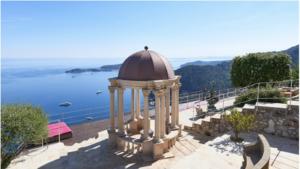